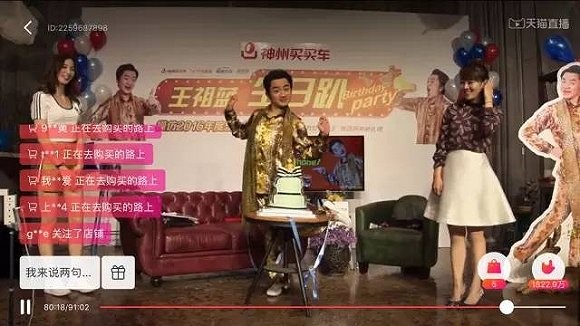 China ecommerce platforms such as Alibaba and JD.com are bringing a Jetsons-like shopping and entertainment reality to consumers across China. The latest trend combines live streaming entertainment with ecommerce. Think of it like watching QVC on your Amazon shopping app but instead of a boring host offering a traditional late-night infomercial experience imagine a live streaming event hosted by Lilly Singh (Forbes 2017 top entertainment influencer) in an environment more akin to a gamified Snapchat or Musical.ly with digital prizes to boot. If you think this might be just some crazy fad from China, here are some compelling results that make a good case for the direction of China ecommerce:

We have seen many previous efforts to leverage entertainment to drive engagement and sales. Despite huge marketing dollars the results have been uninspiring.  While brand building is an important benefit, the industry is still missing the direct attribution link to drive huge dollars into these type of transformational activities.

So, what is it that is happening today in the China ecommerce sector that makes this time different and sustainable? To answer this question, I would argue that the problem has never been about the concept or even the execution around the media and entertainment aspects. The problem has been how to turn the entire sales journey from discovery to execution into a “frictionless” experience.

Amazon today has a formidable numer of one-click buyers, video infrastructure, entertainment, and logistics so is clearly best positioned but they have a challenge with the American consumer that isn’t yet comfortable to living, watching and buying though online TV (I am using “American” as a proxy for many modern societies that have great technology but haven’t embraced it as a way of life like China). Even if Amazon was to replicate the model would consumers turn to Amazon shopping as a place to visit for entertainment? Would users trust purchasing on gamified experience? Would users buy the products if they have to wait even a day? This is where China is in regards to both its infrastructure and the belief in technology as the ultimate answer to the problems in the world has created an environment that allows it to work. And not just in early adopter bubble of Silicon Valley, but at scale on a nationwide basis.

Consider the following conditions that make it possible in China:

Put this all together and you can see how China is quickly becoming both a proving ground and an ideal place for companies to bring their big hairy audacious ideas to reality.

China software resellers: How to get them excited to work with you

To get China software resellers onboard with your product or platform, you need to build trust and excitement through a strong show of commitment and support on your company’s part. While your technology certainly matters, in China, technological prowess from Western...

China SaaS B2B market in 2021: MNCs and SMEs will continue to lead the way

While there were many drivers to China's SaaS B2B market in 2020 - including remote work - adoption of SaaS still hasn't reached its full potential. Even though the B2B China SaaS market has been growing roughly 30% annually according to CAICT, large Chinese...

Generally speaking, the largest difference between software distributors in China and other markets is the comparatively extra workload that Chinese resellers put on Western software companies. This is especially true for software that is not already a well-known...